The Sheldon Theatre entertains, educates, and enlightens the community and its visitors through the transformative power of the performing arts.

“Red Wing is justifiably proud of its Sheldon. It is, to be sure, an outstanding example of a grand Midwest opera house. More, it is one of only a handful that function as built – as a community center for live entertainment.”

History of The Sheldon Theatre

The Sheldon has been described as Red Wing’s “jewel-box”, a place of great community pride. Our region is investing once again in this unforgettable place, because live arts experiences shared with friends, family, and neighbors are special and they always will be.

Built in 1904, the Sheldon Theatre is a vital link between the region’s historic identity and its evolving future. Among the oldest operating theatres in Minnesota, and one of the few from the era to maintain a commitment to live performance throughout its lifespan (even during a period as a movie house), the Sheldon is a community treasure. The ornate gilded interior is rich with layers of history, while the contemporary programs are known for their high quality and an eclectic on purpose approach.

The unusual public/private partnership that created the Sheldon began at the start of the twentieth century when Theodore B. Sheldon, a successful businessman and Red Wing City Council member, bestowed $83,000 in trust to the City of Red Wing. His will stipulated that the money be used to develop a public institution for “some public benefit but nonsectarian purpose…”

The trust directors, including Sheldon’s second wife Annie, decided upon a theatre — the second municipally owned theatre in the United States, and first west of the Mississippi. In 1904, four years after Sheldon’s passing, construction was complete on the T. B. Sheldon Memorial Auditorium. When the theatre first opened, the interior was such a celebration of arches, delicate plaster sculpture, decorative painting, and many other rich details that it was described as a “jewel box.”

This grand venue played host to large traveling shows, prevalent at the time. The 1929 stock market crash and the advent of films led to the decline of such entertainment. In 1936, the theatre underwent a major renovation to better accommodate movies, and the Sheldon was used primarily as a movie house for the next 50 years. In the 1970s, as competition from multi-screen movie houses and television increased and the Sheldon’s operating revenues decreased, the city began to consider alternative uses for the theatre.

In 1984, a special task force was formed to explore restoring the theatre to its original elegance, and using it as a home again for the live performing arts. In 1986, the citizens of Red Wing passed, by an 85% majority, a $1.5 million bond issue to help fund the restoration. An additional $2 million was raised through private contributions. In 1988, the restored Sheldon Theatre reopened its doors as a showplace for the best local, regional, and national performance.

Thirty years later in 2018, the community invested once again in the future of live performance in Red Wing, with completion of a once-in-a-generation capital improvement project that has renewed, refreshed, and revitalized this regional treasure. 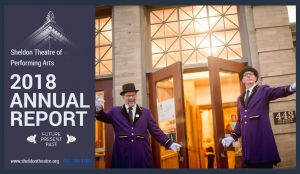