This free, family-friendly music festival starts at 5:00 p.m. with a short opening set by students from Red Wing’s Universal Music Center; local opener Tony Cuchetti will play at approximately 5:30; followed by co-headliners Dustbowl Revival at 6:00 p.m., Kat Perkins at 7:10 p.m. and headliner Caitlyn Smith at 8:30 p.m. All times are approximate.

Festival attendees are encouraged to bring blankets, get comfortable; visit and connect with your Red Wing neighbors; and enjoy a variety of food and beverage options from onsite vendors and food trucks.

Growing up right here in Goodhue County in the small town of Cannon Falls, Minnesota, Caitlyn Smith was drawn to music at a young age. Though she began her career as a performer, in recent years Smith has become one of Nashville’s most celebrated songwriters, with her compositions recorded by artists from James Bay to Garth Brooks, Dolly Parton to John Legend and Meghan Trainor. Since she returned to the stage on her own, tastemakers immediately began taking notice: Rolling Stone has called Caitlyn’s voice “soaring and expressive” and Elle Magazine praised her “powerful, affecting songs,” and she was named one the “top female vocalists” on Billboard’s SXSW 2017 Music Discovery.

Kat Perkins, from NBC’s “The Voice”, has been the top-selling rock singer on iTunes 5 times. She also brings a Midwest connection to the festival, having grown up in North Dakota, and now as a significant figure in the Twin Cities music scene. NBC’s THE VOICE’s Musical Director Paul Mirkovich called her “the best rock singer we’ve ever had on the show.” In the past two years, alone she has been featured twice in Rolling Stone magazine.

Dustbowl Revival is an Americana and Soul band with eight full-time members who mash the sounds of New Orleans funk, bluegrass, soul, pre-war blues, and roots music, into a genre-hopping, time-bending dance party that coaxes new fire out of familiar coal. Over the last five years Dustbowl has become known for their free-flowing and joyous live shows, combining their funk rhythm and brass section with a fast-picking string band section. The band received a big wave of attention with their music video that featured famous actor Dick Van Dyke for “Never Had to Go”, which garnered over 10 million cumulative views.

The Rolling River Music Festival showcases downtown Red Wing and its beautiful hometown Central Park featuring a one-of-a-kind bandshell. Please be advised space is limited and may not be reserved in advance. Attendees are invited to arrive as early as 4:00 p.m. 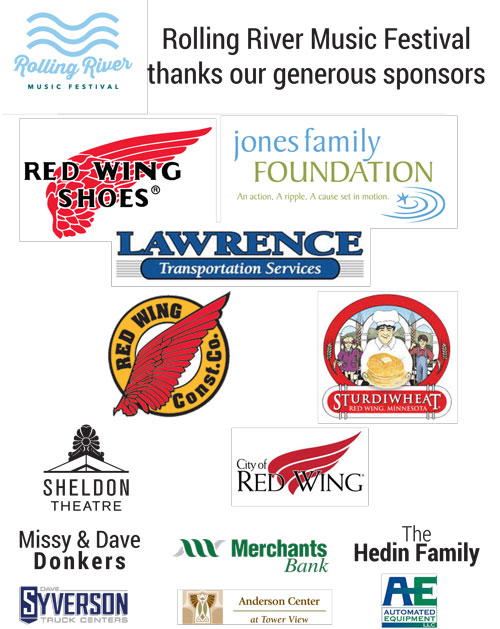 Into the Woods
Scroll to top