Beneath the historic Sheldon Theatre stage, stacks of pizza boxes drew a crowd in the artists’ green room Thursday evening. Over a quick slice and introductory conversations, a community choir formed under the direction of New York City-based performance artist Daniel Alexander Jones, and was ready to rehearse for a two-night performance of Jones’ concert “Radiate.” The freshly hatched choir of just over a dozen voices ranged from Phoenix Theatre regular Chelsea Indrehus to Tower View student Greg Becker — for whom it was the first time setting foot inside the storied theater.

“It was really beautiful,” Becker said. “Walking out of the Sheldon after rehearsal, and after singing with Daniel, I don’t think I have ever felt like that. The night brightened up my mood and personality.”

The Sheldon joins the likes of New York, Los Angeles, Boston and Austin, Texas, smaller theatre scenes, hosting “Radiate,” a concert that follows the storyline of fictitious soul star Jomama Jones. The production has received high acclaim. The New York Times said, “RADIATE glows … making it hard to resist this sequined earth-mother’s soulful embrace.”
Daniel Jones and his team spent several days in Red Wing, rehearsing and holding discussions with community members and students. At Tower View on Wednesday, a discussion with Jones was the motivation for Becker’s visit to the Sheldon. Becker, with classmates Grace Horn, Gabby Nelson and Rachel Safe, said that Jones posed a simple question to the students: What is home to you?

“I’ve never really talked deep like that, ever,” Becker said, “but I am still thinking about it and talking like that has made me want to open up more.”

Horn said that Jones’ aura cultivated an open dialogue among the classmates that they had never had before.
“Daniel had such a nice energy and warmth about him and was so comfortable with us, we instantly felt like we could open up and speak our minds,” Horn said. Safe, a senior at Tower View, said at first she struggled defining her meaning of home, but Jones helped her realize it is not a physical structure like a house, but a feeling of warmth, comfort and love. “I didn’t realize how much my family means to me,” she said. “Of course I love my family, but I take for granted that love. They truly are my home.”

The students recalled a phrase that Jones shared about each person having a thick line or a thin line between opening up and becoming friends with someone. “He asked us to think about what scratches the surface of those lines and what makes you cross that line,” Horn said. “It really made an impact on us all. We are still talking about it.”
The students said the discussion carried on much longer than the allotted time and spanned many subjects.
“He helped us have confidence in ourselves and taught to allow ourselves to be open to having real conversations,” Safe said. “We all realized we felt the same, that no one seems to have faith in our generation, but we as millennials know that we need to watch the growth of technology and its role in our lives and our children’s lives.”
Jones and the students also exchanged some stories about the differences of Midwestern and New York City culture.
“We asked him about the rats,” Horn said, “and it’s true, New York really is a dirty city with a lot of hustle and grind-type people. Although the rats usually stick to the subway, he did get chased by one once.” The students taught Jones about Minnesota’s extreme weather patterns and the summer mayhem that is mayfly season. “He seemed horrified,” Safe said. 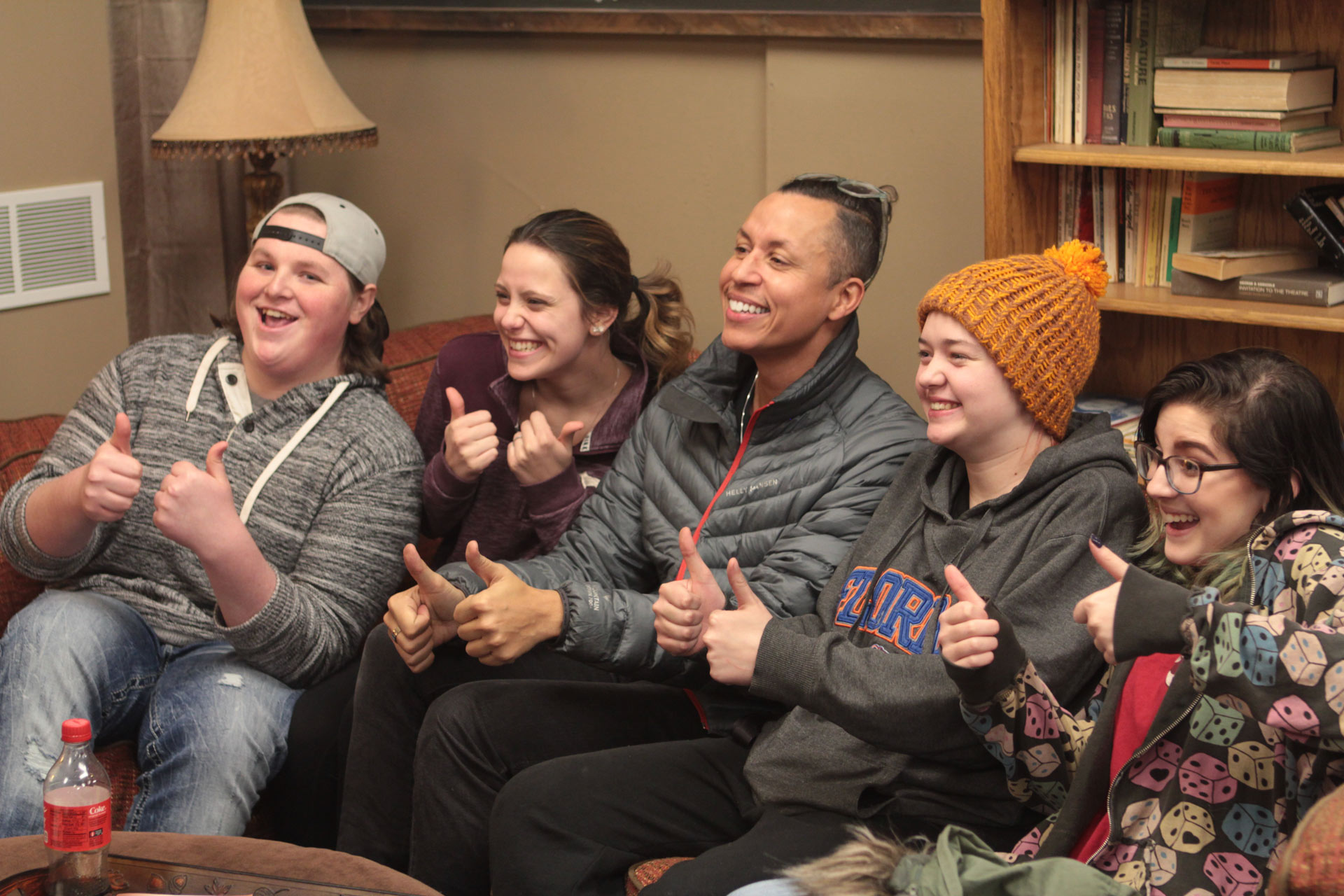 Senior Gabby Nelson said her biggest takeaway was from a fruit idiom that Jones shared. “He told us if there is a party of 10 oranges and a banana walks in, be the banana,” Nelson said. “That really stuck with me because I’m a little bit different. I would have never done a concert like this, but I know now that is important to step out of my box and try new things and do what makes me happy.” The Tower View students, with only a one-day notice and desire to learn as much as possible from Jones, decided they wanted to participate in his concerts Friday and tonight. Daniel performs as Jomama Jones, a former soul diva alter-ego. The concert is a story of comeback as Jomama returns to the United States from a long sojourn in Europe, ready to release her new album and head out on tour.

At the Thursday evening rehearsal , the community choir worked with Jones and his musicians learning the lush harmonies and rich lyrics for two pieces in the show. The mellow and almost clairvoyant sounds of funk, soul, and rhythm and blues grooves filled the auditorium, waiting to reach audiences’ ears. “Singing those lyrics,” Becker said, “it really lifts you up.”

TCL In Your Town: Sheldon Theatre
Scroll to top