The Truth is not an Easy Thing

It’s bustling on stage this week at the Sheldon. Phoenix Theatre, the resident community theatre company at the Sheldon, is starting technical rehearsals for Urinetown, the musical. It’s a bold choice for an amateur company to take on. Complex and eclectic music, stylized characters, satirical humor, and that title! Right? What is that about? This is not your ordinary musical.

Indeed, it’s quite out of the ordinary. It’s the winner of three Tony awards, three Outer Circle Critics Circle awards, and two Obie awards; and it’s also really, really funny. I visited rehearsal to talk to cast and crew members about their experience putting on a show that stands out from the rest. When I arrived, the company was busy adjusting everything from wireless microphones to baby bump costume pieces, to an iron staircase that had just been incorporated a few hours earlier into the minimal set.

When asked why this show, Phoenix Theatre President Helen Olson-Reed shrugged and said, “well, I pee. You pee. We all pee! Now imagine a world where you are forced to pay to use a public toilet every time you need to take care of your private business. All due to a water shortage. A premise so absurd…or is it?”” 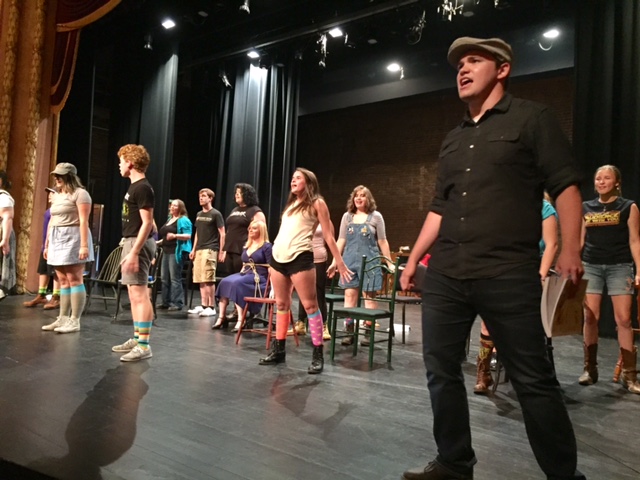 Everyone quieted down when the director Jared Ziegler, Lake City native and an alum of Phoenix Theatre from his high school days, called the rehearsal to order. As he outlined the goals for the evening, there was energy and mutual respect in the air. It was abundantly clear this group cares about one another and the work they are doing together.

The show is structured with an ensemble cast, where many characters share in more or less equal parts in the telling of the story. Jasmine Martin, who is part of the ensemble, told me that what strikes her most about the process is that “we started as strangers and have gotten to be really close.” While there are some roles somewhat bigger than others, everyone is a vital part of the team. All are contributing to the look, the sound, the style.

Olson-Reed, who has been a part of Phoenix since its beginnings 27 years ago underscored that sentiment. “I haven’t been with a group this on top of it before. From an eleven year old to grandparents, everyone is such a part of a team that is just so professional and so talented.”

Chelsea Indrehus, who plays one of the poor, said there are three things that have made this show special for her already, even before audiences arrive. First, “we’re working really well together. Jared [the director] has taken time to really know us, and work with us. That’s been great.” Second, “there’s so much quirky humor. I think it is so funny.” Third, “the music is just amazing, because it has so many different genres. You get a little bit of lots of styles.”

Jasmine Martin described the show as “just different from everything else. It’s not hiding the fact that it’s a musical. It’s not trying to be a pretty show; it’s just real, and for that people will love it.” Mike Fitzmaurice, who has experience in several recent Phoenix productions, mused that “most drama is a metaphor. There’s truth to be found between the lines of Urinetown. It’s a metaphor for our times and our current circumstances.”

When the company started to sing “Look at the Sky,” everything they told me made perfect sense.
Look at the sky
Full of hope and promise
It’s a shining ideal
How I reel
When I look at the sky!
Daily we make them pay
Their nickles, dimes, and quarters –
Daily we break them
‘Cause we have to follow orders
And we keep filling moneybags
With broken lives and dreams
But what’s it for?

There it was – the amazing music, the premise that seems absurd but really isn’t, the truth between the lines, and most of all the power of an ensemble working together in harmony. It all added up to something greater, and quite profound.

Fitzmaurice summed it up best when he said “The truth is not an easy thing.” No, it’s not. And, how remarkable to witness a group of volunteer performers and designers come together to find it and to tell it with the power of united voices and generous hearts. Don’t miss Urinetown.

Why not? Small towns are the great frontier of arts in America.
Scroll to top