Investing in the Future. 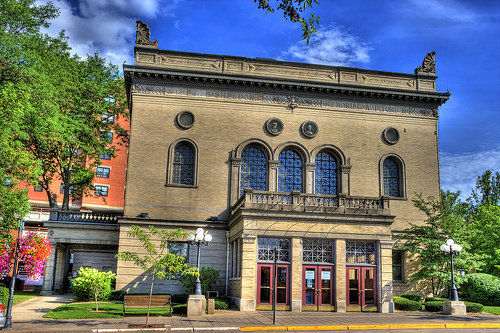 The Sheldon Theatre has been southeast Minnesota’s most beloved cultural center for 113 years, bringing the best of our hometown, our region, and our world into the uniquely warm embrace of downtown Red Wing’s “jewel box.” The Sheldon Board of Directors is pleased to announce significant capital investment in this regional cultural treasure, as we embark on the final phase of a multi-phase renovation project in 2018.

Past
Originated through an estate gift at the turn of the 20th century, and continuously owned by the City of Red Wing, the Sheldon now operates as a remarkable example of what is possible through cross-sector public/private collaboration. The historic building was first reborn in the late 1980s. The citizens of Red Wing passed a $1.5 million bond measure, with an overwhelming 85% of the vote, to help fund the original restoration, and an additional $2 million was raised through private contributions. In 1988, the fully-restored Sheldon opened its doors again as a performing arts center.

Present
That renovation occurred almost 30 years ago now. Beginning in 2012, the Sheldon Theatre has been undergoing a series of behind-the-scenes renovation projects to address structural issues, utility considerations, and general safety upgrades for the building. Already completed components of the multi-phase project include: removal and replacement of the heating, ventilation and air conditioning system; tuck-pointing of the brick exterior; refurbishment of exterior masonry architectural features; installation of new, state-of-the-art sound and lighting systems; and restoration of the building’s historic windows. The roofing contract is in place and scheduled to be complete spring 2018.

Future
The next and most visible round of renovations commences in May 2018. This final phase will require the temporary closure of the Sheldon Theatre to the public. During the closure, renovation work will move to the interior of the building. Work includes new and/or historically restored flooring, ADA accessible restroom facilities, architectural plaster repair, painting, and electrical upgrade including new security and fire alarm systems. Based on estimated construction timelines, the Sheldon Board took action to close the building to the public May 26 – September 30, 2018. Board Chair Nancy Dimunation says, “the Sheldon is a cornerstone of our community. With this renewed investment, it will continue to proudly serve this region for decades to come.”

“The Sheldon remains a shining example of an exceptionally vibrant, small-town arts organization, due to ongoing and forward-thinking investment such as this in both infrastructure and programming,” says Executive Director Bonnie Schock. “We look forward to a grand reopening celebration throughout the month of October 2018.”

While the physical structure is closed to the public, staff will continue working as normal. Tickets for future events will be available online 24 hours a day, 7 days a week; and a temporary physical box office location will be established. Announcements regarding programming will be made as those plans are finalized in spring 2018.

This final phase of the project is funded through Minnesota State Capital Investment Bonding funds as part of Red Wing’s River Town Renaissance Project, and allocated funding from the City of Red Wing’s capital improvement budget.

Why not? Small towns are the great frontier of arts in America.